This week's challenge over at 2things is Orange/Bug.
Click on image to enlarge. 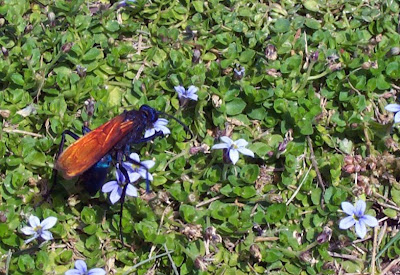 A Tarantula Hawk visiting our back yard. This species
of spider wasp is one of the largest in the wasp family.

They are known to prey on Tarantula as food for their
larvae. Yes, we do have tarantula and they aren't small. I
just wonder how these delicate wasps tangle with the big
hairy beasts. I just pray one never lands on me.

While this insect is really beautiful in person, it scares
the heck out of me as it flies by with it's long dangling
legs and iridescent body.

You can read more about he Tarantula Hawk here at
Wikipedia.

Nature at it's best!

For those hunting eggs, chocolate bunnies, and Sunday
buffets.

My other blogspot is here at: ThE ArTfuL EyE"

This week's challenge over at 2Things is Solemn/Playful.
Anyone can play along, won't you join us? 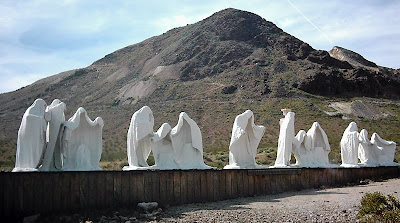 A ghostly rendition of Leonardo DaVinci's Last supper
taken in the ghost town of Rhyolite, Nevada at the
Goldwell Open Air Museum. Click on image to enlarge.

I was so excited to see these sculptures amidst the ruins
of this ghost town.

Rhyolite ghost town, 35 miles east of Death Valley was
originally founded in 1904. There was speculation of a gold
and lots of it. 85 mining companies moved in with plans
to prosper. It had a population of 10,000 in it's day. 1907
financial panic set in, the town went bust, by 1920
only 14 people lived here. In 1924, the last resident died.

Today there are quite a few remnants of the buildings,
train tracks, a bank, grocery store and abandoned mines
that remain in this town and share the land with this museum. 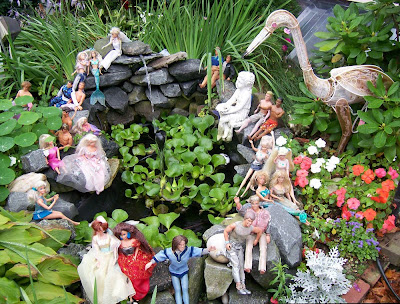 Barbie, Ken and friends on a Romeo's Holiday

Romeo's Holiday Bed & Breakfast was just across the
street from where we stayed in Provincetown, MA.
On one of my early morning walks I discovered this
party still going on. It really made me laugh because
of it's playfulness.

Thanks for the visit.
My other blogspot: "ThE ArTfuL EyE"